The Danger of Ignoring Negative Posts 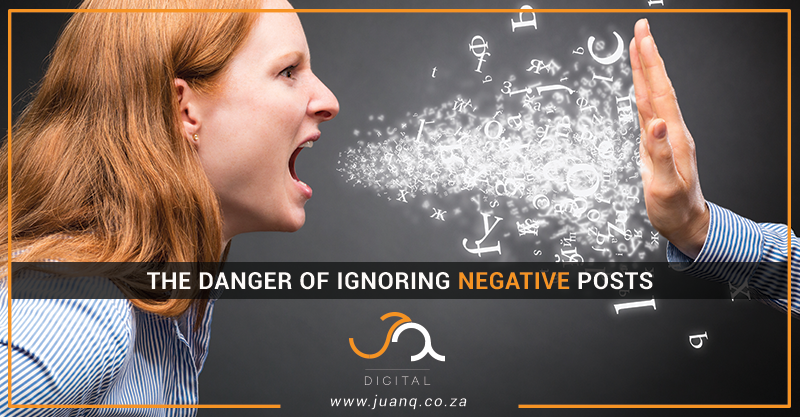 It was once said that everyone’s a critic, and in our fast-paced social media dominated world that’s certainly the case. Gone are the days when customers would send in letters when they weren’t happy with a product or service, or when they would phone up and wait in a queue in the hope of speaking to an operative. Consumers from the millennial generation do one thing only when they have a complaint: they log onto their favourite social media sites, and tell the company about the complaint, followed by their friends across the world. One response is to ignore the negative posts on social media, but to do so can bring huge reputational damage to your business.

The Impact of Negative Posts

It’s long been known that unhappy customers are more likely to comment on a product or service than happy customers, that’s just human nature. Studies show that the average unhappy customer tells between 8 and 12 people about their experience, while around 13% will tell over 20 people. In pre-social media days that was usually as far as it went, but times have changed. With the click of a button one unhappy poster can reach hundreds, perhaps thousands, of online friends, and each of those in turn can pass it on. Before you know it, the cause of the dissatisfaction has gone viral, and it’s easier to build a good reputation that it is to re-build a bad reputation.

Turning a Negative Into a Positive

Even allowing the speed and ease of posting complaints on social media, most users will give users a chance to respond, so it’s vital that your business takes that chance rather than ignoring negative posts. 72% of customers expect a company to reply to their posts within an hour, yet over half of all companies take more than five hours to respond. If you fail to respond on time, or at all, there’s a much greater chance of the complaint being escalated via social media. It’s you duty to do all you can to prevent this. Provide a swift yet personalised response, and be prepared to offer incentives to your customer that can turn their dissatisfaction into satisfaction with the way you handled their complaint. This can even encourage brand loyalty, with all the benefits that brings.

How to Manage Negative Comments on Social Media

As you can see, time is of the essence when dealing with negative posts on social media platforms, but do you or your team have the time that’s needed. By signing up to a social media management service, you can gain the service of professionals who are ready to make a timely and professional response around the clock. With different packages available to meet your needs and your budget, it’s the most cost effective way of overcoming negative posts. Find out more at www.juanq.co.za.